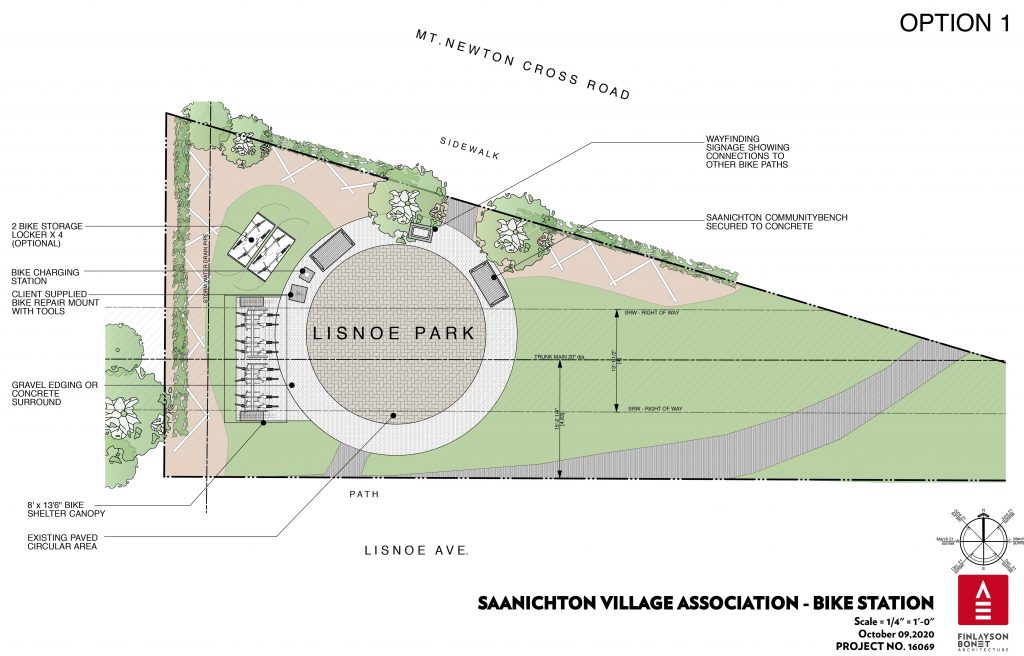 SVA President Jim Townley, in making the announcement, said “What started out as an SVA dream about 5 years ago has now turned into an official reality. The long-awaited Bike ’n’ Ride is confirmed to go ahead, with initial groundbreaking scheduled for the latter part of July and a completion date of late October 2021.”

The new Bike ‘n’ Ride, Townley said, will be located on a small plot of green space between Lisnoe Lane and Mt. Newton X Rd., near Fresh Cup Café and across the street from the Prairie Inn. “We’re all very excited to see this community collaboration finally come together,” he added. “Ever since the completion of our Welcoming Totem project, we’ve wanted to make this happen. Saanichton Village has such great access to transit. Our hope is that residents will use the facility to bike to the Village to shop, or to hop on a bus as a means of travelling elsewhere. The Bike N’ Ride in Central Saanich will really add to the village culture for Saanichton.”

Townley said that, over the past year and a half, Village resident Ron Spelt has done yeoman service as the SVA liaison with the engineering department at Central Saanich to sort out many of the project details. At the table were the SVA, Central Saanich Municipality and the Capital Regional District (CRD), working together to overcome issues and coming up with a workable solution to meet all the necessary criteria.

“It took some head scratching, and a lot of stickhandling, as these types of projects often do,” said Ron Spelt. “A number of groups, including the SVA, had a vision of what the shelter would look like. The final direction and overall design is one everyone can be proud of.”

Townley highlighted the other financial contributors to the project as well — the Sidney Rotary Club, the Sidney Lion’s Club, several private donors, and everyone who contributed to the bottle collection bin located for several years at the Shell gas station. Village architects Finlayson Bonet, he noted, donated their design services to help frame the project’s initial vision.

The Bike ’n’ Ride is the latest project of the SVA which has, since its inception in 2006, undertaken various Village beautification activities, such as the five Welcoming Totems, each stationed on a road leading into the Saanichton Village, carved by local Twasout carver Doug LaFortune with help from his wife Cathy and son Bear; and two community gardens. In addition, the SVA hosts regular events to the benefit of the community in Central Saanich

Underneath the sheltering roof there will be bike stands for people to securely lock their bikes. The station will include tire pump, a repair station and an ebike charging point. There will be a number of solar-powered lights installed for security and safety.

A couple of planned bike lockers, for securely storing helmets and other paraphernalia will be wrapped with Saanichton Village heritage themes. As well, a  standalone feature will display maps of connecting bike trails all over the Peninsula.

The SVA plans to reach out to local artists for input on how the shelter can include a relevant cultural component through the addition of some locally themed art. “We envision this being a gathering place for cyclists who are coming in from other areas of Victoria and want to have a nice space to rest and enjoy some down time on their ride,” said Ron Spelt.

The new Bike ’n’ Ride is on a historical path, the location of the rail station for the V&S railway, which ran from Victoria to Sidney. People would disembark on the very spot of the new structure for a weekend stay at the Prairie Inn, or carry on to Sidney.

Contributions other than mentioned donors

The Central Saanich Municipality will contribute infrastructure needs such as the foundation work, landscaping, and other needed groundwork to connect the water and electrical services. The SVA’s financial contribution will be just over $28,000 to build and erect the bike shelter. The structure will be a little bigger than the one originally planned, to accommodate the needed clearances for CRD easements on the property.

– Jim Townley President of the SVA